Just about 2 years ago Legend of the Five rings changed hands once again. This time it would be going to the veteran gaming company Fantasy Flight Games. It was known that FFG would be making L5R into one of their Living Card Games. With the track record of their previous LCGs I personally wasn’t worried if they would produce a solid game. My concern was with the direction the art would take. A new company meant a new potential direction and anyone who has followed me for awhile knows how much I care about the art of this game. As the leaks and previews rolled out my worries were put to rest. L5R as I visually knew it was intact and the person at the helm of this was FFG’s Senior Art Director Andy Christensen. Andy is a card and board game veteran with formal schooling in fine art as well as comics and illustration. I was lucky enough to get to interview Andy about his role as art director and then some. 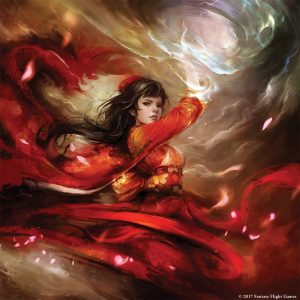 What were your initial thoughts when being given such an already developed world like Rokugan? How familiar were you with the IP before being assigned as Art Director to its rebirth?

Honored! I am very aware of the history of the game, the IP and how much it means to the fans overall.  For years, I have been familiar with the beautiful world of Rokugan, largely through the portfolios of artists. Asian art and culture have been a significant inspiration to me personally, and it’s exciting have the opportunity to channel this influence as well as my enthusiasm into my work at FFG.

Katrina Ostrander, Fiction Editor and overall IP-ninja, and Erik Dalhman, game producer and resident expert-of-the-sword, have guided me with in-depth details of the clans, families, and unique characteristics of the world.  I’ve learned so much from them; I’m so thankful for their feedback and knowledge.  I’m humbled to have the opportunity to contribute to Rokugan.

Of the game’s previous iteration, what clan styles and designs did you personally like?

From an artistic angle, the Dragon and Phoenix clans are incredibly beautiful and exciting.  I love the meditative and spiritual aspects of Dragon artwork.  With Phoenix, I love the opportunities to work with magic and the unique ways it can manifest (though magic is certainly present throughout all clans in some capacity).

From a more thematic perspective, I gravitate toward the Crab clan.  I resonate with their sense of duty, courage, and their overall conviction to protect Rokugan against evil.  The threat of a greater evil is a far more important enemy to focus on than fellow clans and politics… 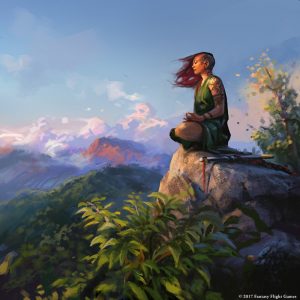 Seeker of Enlightenment by Eli Ring

Was there anything of the previous versions style or design you didn’t like or wanted to change?

AEG created and thoroughly explored so much of the world and created a tremendous amount of amazing artwork throughout the years!  With our edition, I wanted to further build upon what AEG developed, while visualizing Rokugan in some new ways. I encourage artists to approach their artwork with a poetic and emotional sensibility.  I’m very inspired by Sumi-e painting, and the way those artists capture the spirit of the subject instead of relying on literal representation; their very brushstrokes bring life and meaning to their subject.

I’m so inspired by the artists I’ve been working with, and they’ve made some amazing illustrations that are impressionistic, emotional, and capture the feeling behind the character, location, scene, and the world of Rokugan.  It’s my hope that as both new and old players see the artwork on their cards, they will feel Rokugan and its stories, and that everyone falls in love with Rokugan as I have!

Are there any particular pieces from the CCG that have stuck in your mind and why is that? What’s your favorite piece from the LCG so far?

For both of these questions, it’s truly difficult to pick favorites out of so much fantastic artwork; I appreciate pieces for different reasons. I love illustrations that give me insight into the inner feelings of a character as well as when atmospheric effects are used poetically to emphasize the emotion — embers in the air, snow falling, etc. The piece should make me feel what the character is experiencing. 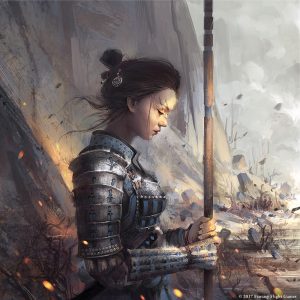 In the CCG every personality was a specific named character. FFG has decided to utilize more generic characters such as Asahina Artisan or Hida Guardian alongside named characters like the champions. How does the direction differ with these cards? Do you approach them all the same or is more detailed direction given for the named characters?

The only real difference in direction is if there is a pre-existing character that we are illustrating. In such a case, we look at previous representations and consider what aspects we want to maintain, and what to refresh or reinvent to be more consistent with the big-picture vision of the IP. So, that can involve some more detailed direction, but we also like to allow for artist interpretation and expression where possible.

Are there any parts of the world we will see coming to life that hadn’t previously in the CCG?

Haha, I wish I could share! All I can say at this time is that we, the L5R team, pour our hearts and knowledge into development of the world. I do strongly believe fans will be excited for what’s to come – I’m very excited for it myself!

What clan are you?

I’m with the Crab clan! I believe in the duty to protect that which is good and drive back what is evil. While people do have their own conflicts to overcome, the more important enemy is from the Realm of Evil and its influence in the world.

Who’s you’re favorite character (past or present) from that clan and why? 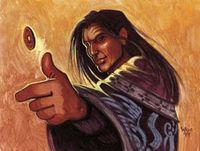 While I’m very interested in the Hiruma family as a whole, I find Yasuki Taka a wonderful and compelling character. Among many other aspects of his history and motivations, I really enjoy the image of a man who has great power and wealth but chooses to present himself as “common” and ordinary.