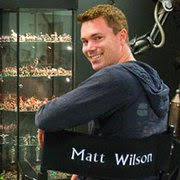 World-builder and storyteller, Matthew D. Wilson has worked in comics and the tabletop game industry since 1993, as a writer, concept artist, illustrator, art director and game designer. He has worked for several game companies as an art director and world builder, including Hasbro’s Wizard of the Coast on such brands as Magic: the Gathering and Dungeons & Dragons. Matt founded his tabletop game company, Privateer Press, Inc., in 2000 as an avenue to tell stories and create expressions of his own original property concepts.

Since that time, Matt has created multiple worlds, designed several games and produced almost a decade’s worth of successful products, including the award winning WARMACHINE and HORDES miniatures games, the Iron Kingdoms RPG setting, and Monsterpocalypse. Matt has gathered six of the game industry’s esteemed Origin awards and numerous other accolades for the products produced by Privateer Press. Today, he is Privateer’s owner and Chief Creative Officer, overseeing the creative development of every aspect of the company, from game development to miniatures design to marketing.