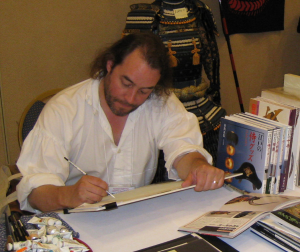 Brian Snoddy graduated from the Art Institute of Seattle in 1985. He started working at at the “in house” ad agency of software reseller Egghead Software in 1986, and worked there for 6 1/2 years. He helped to create the newspaper ads, coupon books, direct mail, and eventually became a product illustrator. After Egghead fired the entire art department one day, Brian then went to work for Creative Fire Studio. There he worked in comics, where he drew backgrounds and did some occasional inking for such titles as Shaman’s Tears, Bar Sinister, Maggie the Cat and Classic Star Wars. At this time he also started working on storyboards for Saturday morning cartoons. He worked on several shows including EXO Squad, X Men, Disney’s Gargoyles, Garfield and Friends, and Jim Lee’s Wild Cats. In the early 1990’s, Brian became one of the “First 49” original Magic the Gathering artists, where he produced over 150 paintings. Brian then pursued an active career in SCI FI and fantasy CCG industry. One of the many other card games Brian worked on was the popular CCG, Legend of the Five Rings. In 2001, Brian co founded and co created Privateer Press, the producer of the popular table top fantasy war game Warmachine. Brian later went onto work in the video game industry, historical illustration, and is now currently a full time concept artist/illustrator at Flying Frog Productions. They produce the popular horror adventure board game, Shadows of Brimstone. Brian is also and avid Japanese arms and armor collector and researcher.