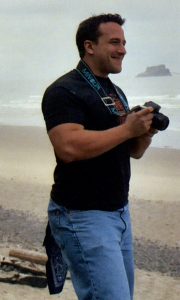 Jason Behnke has been a working artist, illustrator, and graphic designer for over twenty years. He got his start in early 1996 when one of his first clients, AEG, hired him to create five illustrations for Legend of the Five Ring’s Forbidden Knowledge. This project would unexpectedly become the beginning of a long and fruitful relationship with Jason contributing many more illustrations for L5R across his strange and varied career.

Over that time, Jason has explored a variety of different paths along his creative journey. He entered the corporate world doing presentation design for large corporations, small companies, and design agencies. He’s traveled around the world (literally) supporting presentations for events, keynotes, and conferences for senior level execs, VPs, and CEOs. At the same time he still kept at it with the brush and the oils, continuing to work on his craft and his passion during long nights and weekends. He’s bounced all over the northeast part of the country, sometimes relocating almost annually, chasing some nebulous dream of success, happiness, and peace of mind.

Finally he drove across the country to the northwest, met and married his muse, and settled down. Mission accomplished.

After about a 10 year hiatus from illustration, he came back and picked up where he left off with AEG and L5R. His first assignment was painted in oils, but he was seeing changes in the illustration field that he felt were critical to adapt to since he last commercially illustrated for clients. So he invested in self-learning the digital medium based on his traditional training. After about 3 years he finally began feeling confident in this new approach to illustration, and now most of his commercial work is created almost exclusively in Corel Painter.

Nowadays, Jason continues pursuing illustration, graphic design, and fine art. He still paints traditionally, mostly for commissions and personal use, as he strongly believes in the fundamentals and wants to keep his traditional approach as the foundation of his digital work.