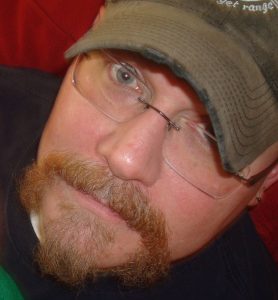 Originally from the suburbs of New Orleans, Michael currently resides in Florida with his wife, daughter, and son. Though, he hopes to one day return to New Orleans and get back to the incredible food, people, and culture that make up his home town.. Michael started his illustration career in 1997 after graduating from the Savannah College of Art & Design. Since then he has worked as an illustrator, concept artist, art team lead, and professor. Over his many years in the publishing and gaming industries, he has fostered an obsession with drawing angry robots and giant-lizard-type-critters whenever he can get away with it.

During the day he can be found slaving over a hot Cintiq, scribblin’ out illustrations and concept art. At night he spends his time playing with traditional media on personal projects which may or may not be released some day to great fan fare and single-handedly cause world peace to break out or, at least, make some viewer say, “Wow, that is one cool heavy-jawed lizard-type-critter being ridden by one angry robot.”