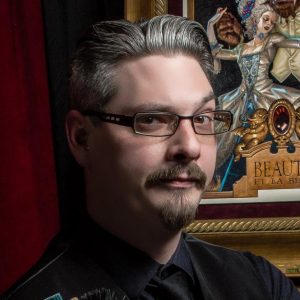 Chris has been a freelance illustrator in hobby games for over a decade.  He is a graduate of the Columbus College of Art and Design where he earned his Bachelor of Fine Arts degree in Illustration.  His work can be seen in such properties as Skylanders, Dungeons & Dragons, Kaijudo: Duel Masters, World of Warcraft, Harry Potter, Hearthstone, Pathfinder and is a contributor to Imagine FX Magazine.

In 2015 Chris’ personal work appeared in the group show Wild About Harryhausen at the Merry Karnowsky Gallery (Los Angeles, CA).  In 2014 his noncommissioned work, Beaute’ et la Bête had the honor of being included in the Spectrum Fantastic Art III exhibit at the Society of Illustrators (New York, NY). That same year he was also awarded a certificate of merit from both ARC Salon and the Society of Illustrators Los Angeles for outstanding works.  In 2013 Chris’ work appeared in the group art show, ZOMBIE at Last Rites Gallery (New York, NY).  His personal work has appeared in Spectrum 19, 20, 21 and 22 the best in contemporary science fiction and fantasy art from around the world.

Chris continues to work on his Cameo Creeps collection, personal and commissioned projects and exhibit around the U.S.