Clash of Champions, a Test of Art

Now that everything for the moment has been released I figured it would be a good time to compare some of the new works to those of old. In an idea that I clearly ripped off from http://originalmagicart.com/ and his Reprint Rumble series, this will be part of an ongoing series of articles comparing the illustrations from cards of old to those of the new ones. Each article will show the two pieces, allow you to vote on which one you prefer, and then have my choice with explanation. These will mainly be focusing on character illustrations but may expand to include other pieces.
Those up for comparison this time around are the clan champions. While many of these had various experienced (and inexperienced) versions the only ones we will be comparing are the original printings of the CCG and LCG where they appeared as champion. The two exceptions here will of course be the Crane and Unicorn champions as they are brand new characters in the LCG. I will still be comparing these to their old counterparts but with special considerations.
First up is the great bear himself, Hida Kisada. His first printing was done by Matt Wilson for Imperial Edition in 1995. The newest was illustrated by Shawn Ignatius Tan for the LCG Core Set in 2017. 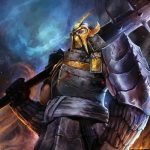 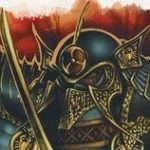 New version – The colors in Matt Wilson’s version are very vibrant and the detail work in the armor is great. But the piece itself fails to give a good impression of Kisada’s size. In Wilsons piece he looks more wide than tall. Neither piece features another figure for comparison which would have gone a long way to help the viewer understand how great the bear is. Tan’s piece does work with the perspective by having the point of view start from below to give a better sense of Kisada’s size.

The first printing of the Dragon Clan Champion Togashi Yokuni was in Imperial Edition by Matt Wilson. His newest version is from the LCG Core Set by Shawn Ignatius Tan and Le Vuong. 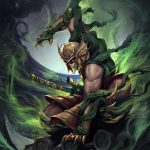 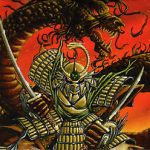 New Version – Matt again uses some beautiful colors in the piece but I feel the proportions are flawed like with Kisada. While not exactly the mountain of a man Kisada is, Yokuni is still of great stature. This piece did establish the look of Yokuni in terms of his helm and armor as no other version of him would ever stray from this. Wilson did go on to do later versions of Yokuni and those are the ones Tan and Vuong clearly took inspiration from, most notably his experienced version. You can see it clearly in the pose of the two. The proportions of their piece are a bit on the normal human side they still include his signature helmet and armor. The background effects also help to give an impression of mysticism.

The first printing of Akodo Toturi in the CCG was in Imperial edition illustrated by Randy Gallegos. In the LCG he is printed in the Core Set illustrated by Shawn Ignatius Tan. Toturi would never end up being clan champion in the CCG. 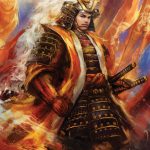 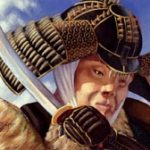 Neither – I know it is not in the spirit of this article to pick neither but I really can’t decide. Neither piece truly strikes me as “Toturi” and this isn’t exactly the fault of the artists. Toturi himself is not exactly a visually striking character. Where characters like Kisada had their stature as a known physical trait, Toturi was just average. The chance to make a more unique and memorable iteration of Toturi was passed up. We are told of his great tactical ability through story but that’s not shown here. Gallegos would later produce more striking images of Toturi and a few incorporating more of his tactical ability.

Shiba Tsukune was first printed as champion in the CCG in Jade Edition, released 1998, illustrated by David Martin. There were a few earlier printings of her but this is the first time she had the champion keyword. She would be illustrated in the LCG Core Set by Shawn Ignatius Tan 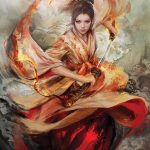 New version – Due to the lack of physical uniqueness to the character, this is a tough call like Toturi. Though with this one I let Tan’s piece win out. Martin’s version gives us a pretty standard looking female samurai. With nothing that sets her apart as the clan champion. There is a massive Phoenix Mon in this picture but it takes more away from the art than adds to it. Tan’s piece isn’t too much different in terms of the look of the character but the additional effects and action oriented pose really help give Tsukune some actual character.

Bayushi Shoju is another interesting one. His first character printing with the clan champion keywords was in Forbidden Knowledge, released 1996, and illustrated by Ron Spencer. That Shoju was a very different one from when he held the clan champion moniker proper. So instead I will be focusing the version of Shoju printed in Scorpion Clan Coup 1, released 1997, and illustrated by Thomas Manning. This sets cards canonically came before those in Forbidden Knowledge. His LCG version is illustrated by Shawn Ignatius Tan for the core set. 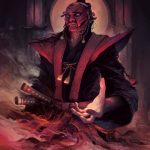 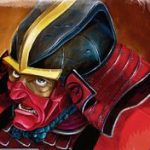 New version – This is another case of the character and “original” piece not being very striking or detailed. Shoju was not a long running character in the CCG, having gotten only the two cards previously mentioned, so it makes sense there isn’t much reference material to work from. It is once again the added details from Tan that decides this one. Most notably the pose. Shoju appears to be offering you something that might be too good to be true. Tan also went with a full face mask, something Shoju is seen with in the old RPG books he appears in. However if I were comparing it to Ron Spencer’s Zombie-Shoju that one would win hands down.

The next two champions are new to the game but are rooted in versions from the CCG. So I will be working to compare them more on how they embody their particular clans. It may not be the cleanest of comparisons but its the best I have for now.
Doji Hotaru in the LCG is effectively the gender swapped version of Doji Hoturi. Hoturi was first printed in Imperial Edition, illustrated at that time by Douglas Shuler. Hotaru in the LCG was done for the Core Set by Shawn Ignatius Tan 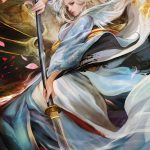 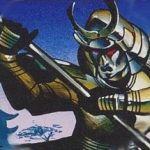 New version – Tan’s version really highlights what the typical Crane Clan samurai became. Long white hair, striking beauty, and elaborate flowing robes. At the time that Shuler created his version of Hoturi this style wasn’t fully established. Hoturi could easily pass for a number of other clan’s samurai or even a ronin. There’s almost nothing within the picture that ties him to the clan he is champion of, save for the one item he and Hotaru share, and that is the naginata. This is probably the second most common weapon of the clan behind the katana of course.

The other swap and last champion up for poll is the Unicorn Clan champion. This is effectively another gender swap with Shinjo Altansarnai taking the place in the LCG where Shinjo Yokatsu held in the CCG. With Altansarnai coming from the LCG core set and Yokatsu from Imperial Edition in the CCG. 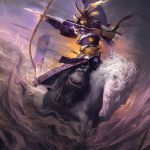 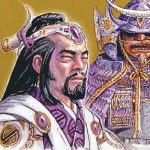 New version – This one was somewhat close for me both pieces were very strong and included parts I felt embody the clan. The deciding factor was the inclusion of the white horse in Altansarnai’s piece. I feel this is the major icon the clan is known for. Tedin’s piece includes several little bits tying it back to the clan, including a few unicorn horns and strong use of the clans colors. Yokatsu though is another case where there character at first didn’t have much going for them. Tedin was still able to make him feel a bit unique.

The new versions are the overall winner here. Going into this I did not think it would be so one sided. In a few cases it was close but the newer won out. I think my memory was recalling most of the later versions of these characters. I know this was the case for at least Yokuni and Hoturi. Had I been making the comparison to later versions of the CCG champions I know this would have been a much tougher call. Such as with the experienced version of Yokuni as it’s one of my favorite pieces from the game. Something of note I was informed of after finishing most of the writing for this is how Tan made each of the champions reflect their clan mon. To me this wasn’t very obvious at first and for a few you kind of have to turn your head to see it.
If they make updated or “experienced” versions of the existing champions I will compare them to those accordingly. We have seen that more of the old cast of characters will be returning so I plan to continue this type of article as we get enough. I might do some comparisons of conflict cards if they do release enough comparable pieces.