A Champions Heart, an art retrospective of Hida Kuon 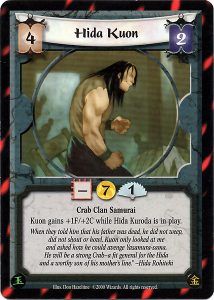 Hida Kuon, War of the Spirits

Kuon never intended to take up the mantle of clan champion. He personally had no shortcomings preventing him from being such. It’s just his brother Kuroda was seen as the stronger leader and tactician. The talents of these twins made for an excellent pairing. Where Kuroda was calm and reserved, Kuon was brash and violent. Kuon’s first card (The War of Spirits, art by Don Hazeltine) showed this characteristic very well. It depicts a sneering man standing in  a ramshackle room, victorious after a just concluded barroom brawl. 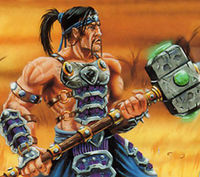 That same card for Kuon ended up as a Gold Edition reprint, this time featuring new art done by Paul (Prof) Herbert. Prof’s given direction did not specify recreating Kuon. In fact, he had no idea who this particular character was going to be. He was just told to make a Crab character that looked  like a “really tough, survivor dude”. The art specs included equipping the character with a large hammer. Prof decided on his own initiative to add the chunks of jade as a material known to have natural effectiveness against creatures of The Shadowlands. The design choice for this weapon remained throughout most of Kuon’s later iterations and various appearances. The choice to go with larger, but less confining, plating at this time reflected the storyline as Kuon fought with a more “berserker” style. A design choice carried throughout his various versions would be his ponytail style top knot and fu manchu facial hair both of which would remain a staple for the entirety of his printed existence. While unclear if art dictated the story, Prof’s choices with Kuon nevertheless aligned  well with his story and later depictions.

It was between his initial printing and Gold reprint Kuon’s father died in battle. Upon learning of his father’s death, Kuon calmly asked the messenger,“How can I avenge him?”. From this moment on, in Kuon’s life saw even more hardship. His mother, Hida O-Ushi, would soon be cut in half from a duel with the Crane Clan Champion Doji Kurohito. This put the mantle of Crab Clan Champion upon his brother Kuroda.

Kuroda witnessed a change in his brother after the death of their mother, and not for the better. A growing rage within Kuon resulted in Kuroda assigning him to a defensive position away from the front lines and any fighting. He commanded the armies defending the Yasuki family lands along the border of the Crane Clan lands as represented in his next card from the set A Perfect Cut (also done by Prof). 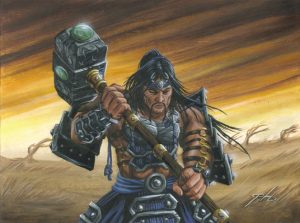 A Perfect Cut featured a darker tone that reflected Kuon’s place in the story at the time. Prof was only given directions to make Kuon look “cool” and to give him the backdrop of The Shadowlands or another wasteland. That particular aspect actually clashes with the story since at this time he was assigned far away from the Shadowlands or any similar area. Prof did want to ensure that he gave Kuon a look of capableness, befitting a Crab who could get things done himself. As we have seen with other experienced versions of characters drawn by the same artist, the general design built upon previous version(s) with only slight changes. Kuon’s armor builds upon his previous version by adding  additional straps and plating. He still, however, retains his distinctive hair style while brandishing his iconic jade studded hammer. Overall this was another situation where it’s hard to say if the art explicitly  dictated the story.

After the events depicted in Perfect Cut,  things really came to a head for Kuon. His brother would fall in battle facing off against the Onisu of Fear, Kyofu. This left Kuon as the lone survivor of his immediate family and thus the rightful heir to the title of clan champion.While initially not where he saw his life heading, Kuon still fit into the role of champion rather well. The cards Inspiration and It’s A Trap (Dark Allies, illustrated by Ben Peck) portrayed some of the bumps in the road that Kuon faced. In these pieces we see him letting his emotions get the better of him and hurling his hammer at the dark lord Daigotsu. Unfortunately for Kuon, things do not go as planned and the hammer Daigotsu shattered the hammer with just a wave of his hand. These were story driven images so there wasn’t too much in the way of personal artist direction. Later cards also reflected the loss of his hammer. 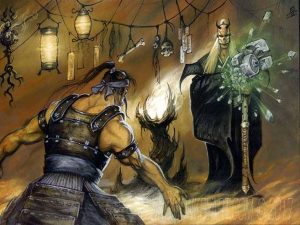 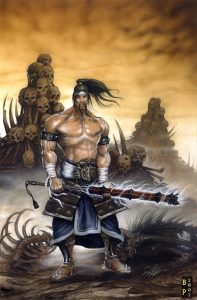 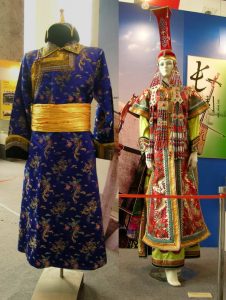 Kuon’s next version, and his first card under the champion title, would come to us in the set Broken Blades illustrated by Ben Peck. Those familiar with Kuon probably first noticed the lack of his iconic hammer, replaced by a tetsubo, another common Crab clan weapon. In the story Hida Kisada once wielded this same weapon. It shares the same style as the one featured on My Father’s Weapon, however this is not Kuon’s father’s weapon. This similarity boils  down to both pieces having the same artist. Ben actually completed the piece for the weapon before doing the Kuon piece. The weapon was to be an anti-Shadowlands weapon, but instead of the usual jade laden green glowing weapon, Ben decided to go for a more divine imbued weapon and gave it a white glow. Kuon himself continued to wear  the ponytail top knot and fu manchu as seen in previous iterations. For the piece itself, Ben wanted to go with a more Chinese\Mongol look to his garb. You can see that the lower part of his clothing resembles a Deel common to particular areas of Mongolia, down to the wide belt. I do have to give special mention to the giant crab belt buckle. The artist also chose to utilize the Shadowlands as a backdrop. Unfortunately when viewing the art on the card, one can barely see the dead Tsuno at Kuon’s side. Nevertheless, Ben included this due to the prevalence of that type of creature in the story at the time and he really enjoyed illustrating them.

Ben depicted Kuon with his tetsubo one last time on the card Legendary Strength in Fall of Otosan Uchi. In this piece Kuon leaps at some undead, no doubt about to put that tetsubo to use. This image reminds us that while  the champion now, Kuon remains a berserker at heart. The card retains the previous design points of mongolian style outfit, wide belt, and the giant crab belt buckle. Beyond just continuing this design style for Kuon, Ben sought to depict Kuon putting his new toy to use. As said, this would be the last appearance of this tetsubo so I can only assume it remained within these undead. 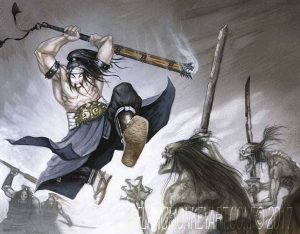 Kuon may have started out as a simple commissioned piece of a “dude” but he went on to achieve great things. He was a major fan favorite and one of the more recognizable characters of the game. Kuon would make more appearances as he stuck around until close to the end of the CCG. He has many more versions and will be placed in the hands of a few more artists before his time ended, but that remains for another article. 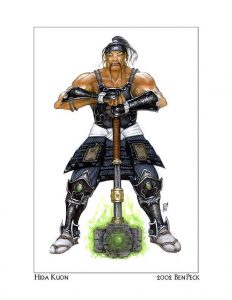 2 comments on “A Champions Heart, an art retrospective of Hida Kuon”