Legend of the Five Rings has had many huge moments within its story throughout its twenty years. From the Unicorn Clan Khan’s march on the imperial city to the Four Winds defeating the Dark Lord Daigotsu, but none are as highly remembered as the Second Day of Thunder. No other moment in the story had so much hinging on it. The results of this day would have an effect on the next thousand years in Rokugan.

The pivotal time in the story saw the possession of the current emperor by the dark god, Fu Leng. Witnessed a leader with no home stake his claim in the empire. Looked on as a clan lost its leader and descend into a civil war. Forced a warrior to face a superior duplicate of himself. Made a master put to rest an equal who fell too far. All before a final confrontation between the dark god and the Seven Thunders of the clans.

In the real world the Second Day of Thunder played out at GenCon 1997. Players from across the spectrum of playable factions gathered to duel it out and decide the fictional fate of Rokugan. If evil won, a thousand years of darkness would fall upon the empire. If the forces of good were victorious, then a member of the winning faction would be declared the new emperor and the thousand years of darkness thwarted. In the end only a Lion player and Crane player remained. So the darkness was thwarted but an emperor still needed to be decided. One match later we had our decision.

The Lion were victorious this day and for that their Thunder, Toturi, would be named emperor. The Crane would lose their Thunder, Hoturi, but in a glorious fashion. John Wick, the creator of the world of L5R, had written out all the different outcomes for that day and kept them in envelopes. As each factions hopes of being the final victor for that day were destroyed so too were their respective sealed results. In a surprising twist the last two players requested an even different result and John tore up the last two envelopes. With the match decided John began his speech to the crowd, all from his mind. He spoke of how the final two Thunders able to fight, Toturi and Hoturi, were able to deal the final blows to the dark god. Hoturi would land a deadly strike leaving Toturi the perfect opportunity for the killing blow. He would do this though at the cost of his own life, as he suffered a fatal wound in the process. This final battle would only live on in the minds of those who heard or read about it later. This epic confrontation would never see a proper visual representation. 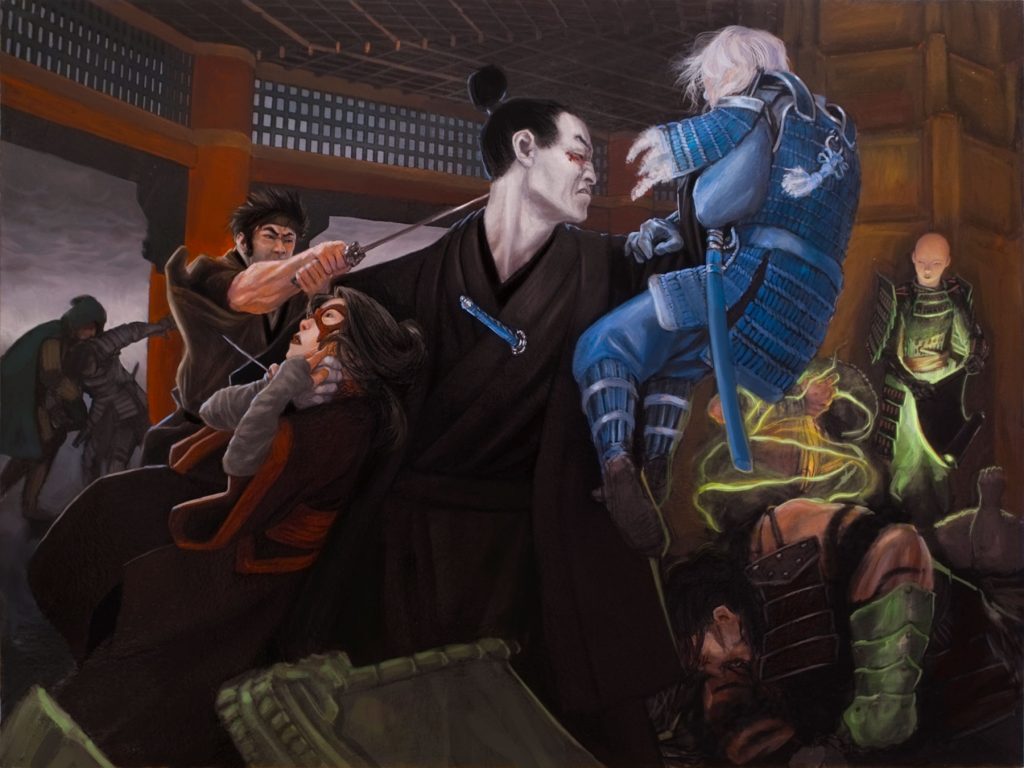 When Drew Baker was tasked to bring this event to life. This is my interview with him.

I was asked to do that moment specifically, yes. I knew the art was for something related to celebrating L5R’s ten-thousandth card, but I don’t think I knew any more details than that.

To the best of my knowledge, that specific moment in the game’s history was only known through a speech given by John Wick and had no visual representation prior. What kind of preparation did you do to take on such a piece?

I’m sure 10 years’ experience on L5R prior to the piece was a big help, preparation-wise. Adrian — the AD at the time — sent me the fiction to start with. I made some notes as I read it of elements and character actions to keep in mind while composing the image, and asked for some reference images of the Thunders and the throne room. Then I got into thumbnailing the piece, trying to fit all the elements together in a way that would show everything that needed to be included and still look good. It was a difficult puzzle to solve.

Was this the first time you’d felt challenged by the space constraint and thereby what the final result would look like on the card?

Oh, no, but this was by far the most extreme case. A personality card is focused on one character. An action card may need two or three, but for this one I had to work in ten different characters. And normally if I get a description that won’t work well I can edit or massage it, sacrificing the less important parts for the clarity of the more important parts. With this piece I didn’t have that flexibility; I needed to include everyone.

What aspect of each character were you making sure to include and were any of them a greater challenge to do so?

With iconic characters like that I obviously want them all to be recognizable. That’s the bare minimum. I also wanted to portray them well — they all have their fans, and I was only going to get one shot at painting the Second Day of Thunder. So I wanted to give them all their due — as best I could, anyway. I still had to stay true to the story, and for several of them that fight just didn’t go well.

I think people have the most trouble picking out Isawa Tadaka, as he’s behind Doji Hoturi and wrapped in his rebounded jade lightning.

So you said you got to work ‘thumbnailing’ the piece. Can you elaborate on that process?

Sure. It’s a way of testing and developing ideas. I don’t have the Day of Thunder thumbnails on hand, but if you look at my sketchbooks you’ll generally see a lot of these small sketches where I test out poses, lighting, scenery, camera angles, and all that stuff. I’m looking for the story I want to tell, and the right way to tell it. (The dots in this example scan are 5mm apart, so most of these sketches are less than an inch tall.)

I did actually handle the Second Day of Thunder a bit differently because of its complexity. I ended up working on figure groupings separately, and after I got things I liked I composited and adjusted them to work together as a whole in Photoshop. 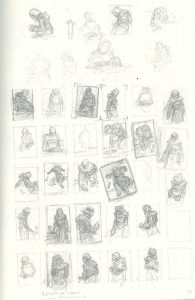 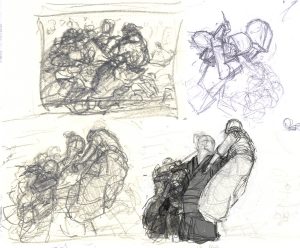 Now I know this piece did get done traditionally. So how far into the creative process did it go in Photoshop, from the start did you plan to do the final traditionally, and what are the challenges moving from Photoshop to canvas?

My plan had always been to paint this one in oils, yes. I’d been working on moving my illustration work from digital to oils for about 5 years by the time this project came along. Because my Photoshop has always been pretty rudimentary — I still do a lot of redrawing and repainting by hand — I expect it wasn’t as hard to give up for me as it would be for someone more fluent with digital tools.

I took this one pretty far along in Photoshop, actually. Nowhere near a refined finish, but I had a pretty solid reference for the colors and values to guide me through the final painting, and a drawing I thought was good 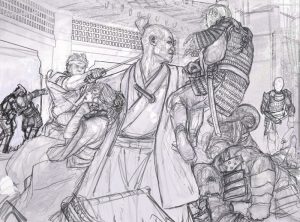 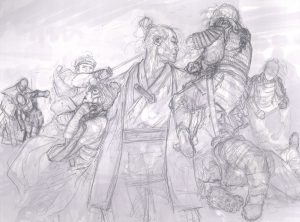 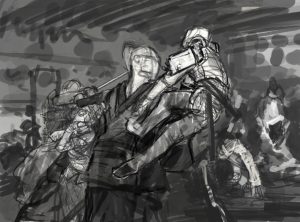 When doing the individual character designs, what sources did you look to? Were the characters thunder versions used primarily as references or did you pull from other iterations of them as well?

I’m afraid I’m not sure. It was some combination of reference from the art director and images online. Someone more knowledgeable than me could probably match what I painted to sources, but I can’t. At least not this far after the fact.

So up until your depiction of it this scene lived primarily in the mind of one man, John Wick. Did he ever comment on your piece that you know of?

If he has, word hasn’t gotten back to me, no.

I reached out to John and here is what he had to say about the piece,

“The Day of Thunder was not only an important moment in L5R history, but an important moment in my own life. Surrounded by hundreds of L5R fans and my friends at AEG, there was awe, laughter, and tears. I’ll never forget it. The beauty and intensity of this image is a testament to what we—AEG and our fans—created that day.” -John Wick

One comment on “Day of Thunder, Interview with Drew Baker”