Bound to Revenge, an art retrospective of Ginawa

Ginawa was a natural leader. At the age of 17 he controlled his own unit of approximately 5,000 soldiers. Soon after that his master tasked him to dispatch a group of ronin. He did so but unbeknownst to him, one was a shapeshifter. This shapeshifter would take his revenge by posing as Ginawa’s master and bestowing upon him the bloodsword known as Revenge. Later the shapeshifter caused Ginawa to take his master’s life, forcing him to the life of a ronin. These two events would go on to drastically shape Ginawa going forward. 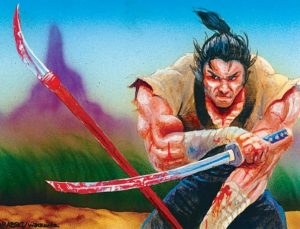 Ginawa’s first card in Imperial Edition featured him already as a ronin and brought to us by Bryon Wackwitz & Anthony Grabski. Grabski did the initial sketch and Wackwitz the final painting. Akin to most ronin, his clothing is drab and bears no iconography relating to any clan or faction. His light colored shirt dark pants remained constant throughout his many iterations. Brandishing a pair of bloodstained weapons he comes across as a ruthless and resourceful fighter. Ginawa’s bloodsword never received its own card. Since it never left his possession during these years, one assumes the sword portrayed in these early images is indeed Revenge. 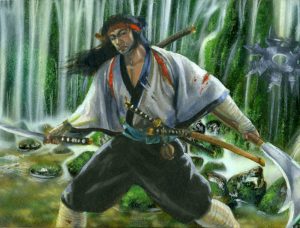 After his initial appearance, Ginawa later met up with Toturi, joining his army as one of the initial Twelve Ronin. This time Bryon Wackwitz was the sole artist. According to Wackwitz, Ginawa was initially inspired by old samurai films much like the ones made by Kurosawa. is clothing style underwent just a minor change as his shirt went from tan to more of a white, helping it stand out against the background. We see many swords here but none stand out as the one of legend he was known to carry. 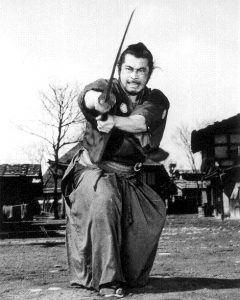 Between the initial printing of his experience 1 card and his experience 2 version, Ginawa became entangled in the plot of the missing emperor Toturi. During this time Ginawa found himself in many dangerous situations that pushed him to his limits. Wackwitz’s image reflects these situations and continues to show his inspiration from old samurai films. Also here more than anywhere else do we see the inspiration from Marvel’s Wolverine, with a pose very similar to that of the cover of Uncanny X-men 141.

For the first time we begin to see the effects of the sword that Ginawa carries. This scene appears to show him in the midst of a violent episode. Revenge was known to cause its wielder to go into a blind rage, killing everyone in sight. The rage only subsided once no further enemies remained to oppose the wielder. Afterwards, the wielder would recall nothing of the conflict. This effect is something we would see alluded to and featured in other pieces. This actually mirrored the berserker rage that Wolverine would succumb to. According to Wackwitz, the similarity was purely coincidental though.

We would not see Ginawa again as a personality for a few years. After Wackwitz stopped producing work for the game, the task went to Randy Gallegos who did an outstanding job. Randy knew the prominence of this character, and wanted to do justice to Wackwitz’s previous versions. The original piece is 11×17”, much larger than most pieces for a card game. The cropped down version for the final card, cut off most of the sky. Here is the uncropped image, provided to me by the artist himself. 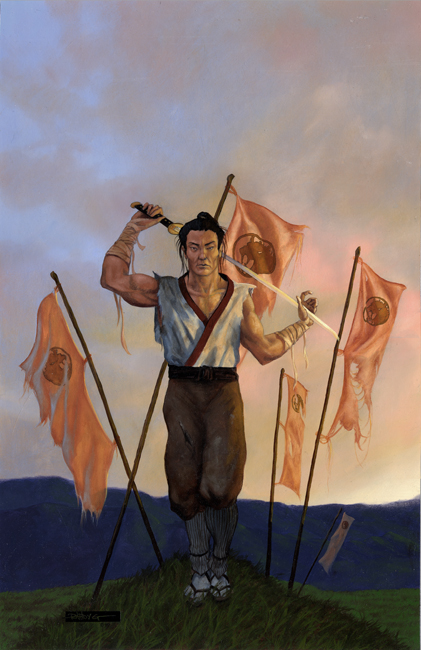 This piece was done as an homage to the character and his prominence in the early years of the game. At that time in the story he had effectively saved Toturi’s life several times, sought out the ninja that killed his master, and watched an ally sacrifice himself for love. After all that, his original family’s name, the Akodo, was reinstated and he was named the new daimyo by Emperor Toturi.

With his family’s name restored and Toturi’s army all but disbanded, Ginawa’s time as a ronin had concluded. When I next revisit Ginawa I will be covering his post-ronin life, cards influenced by him, and others he appeared on.

One comment on “Bound to Revenge, an art retrospective of Ginawa”