KC Lancaster produced a number of works during the early years of L5R, starting in Imperial. After serving as an artist of the game for awhile she moved to being the art director. Her work had a more classical approach and took much inspiration from older Japanese works. She was gracious enough to answer some questions about her works, including some of her more well known works for the game.

What was your artistic background before joining AEG? 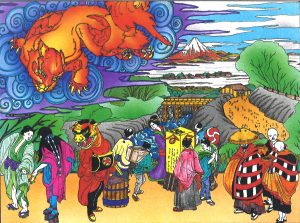 While most know you as an artist for the game you also served as the Art Director for a period of time. Did you come onto the team as the AD or artist first or both at the same time?

I started as one of the initial artists for the game, but when Matt Wilson wanted to move on, we got together with John Zinser and I transitioned to being the CCG art director.  I was grateful for the opportunity and to date it’s still my favorite job ever.  The position segued into being the interim art director when AEG sold the game to Wizards of the Coast until they reassigned it in house.

What other games were under your direction? Did the other games teach you anything that you applied to your work for L5R or vice versa?

In addition to the L5R CCG and RPG items, I also art directed for Legend of Burning Sands (LBS), the short-lived expansion game from L5R.  It had some L5R character carry-overs and storyline tie-ins.  It was exciting to be on the “ground floor” of a new game and I enjoyed it thoroughly.  I carried over everything I learned from L5R, (organization, style guide, adhering to time tables, recruitment, enthusiasm), and brought many of the same artists over as well as finding new ones. 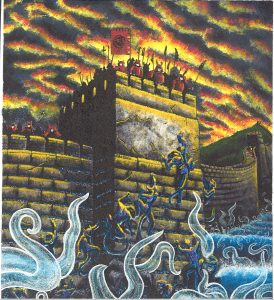 What kind of tasks did you have to handle for the changeover to WotC?

I mostly finished up L5R expansions in production at the time.  They dropped LBS immediately and focused on tying up L5R storylines, getting artist contact information, etc.  I stayed with the AEG style until WOtC transitioned the game to in-house art direction.

What parts of the games artistic design did you like? What parts did you envision differently?

The essential design was already established when I became an art director.  I loved what they were doing and wanted to keep it going.  It was a team effort and when asked for my opinion on design, I offered it and did what I could to help.  I really enjoyed the brainstorming sessions.

If I’d had the chance, I probably would have designed the “frame” portion on the card differently.  I thought it was a little busy and sometimes visually competitive with the inserted art.  But that’s just personal esthetics and the game depended on playability, not just visual beauty.

I didn’t really follow any of the other design elements or their evolution, I was kinda focused on my own stuff.  If I had been involved with the frame design, I probably would have gone more with traditional Japanese elements, since that was my passion. 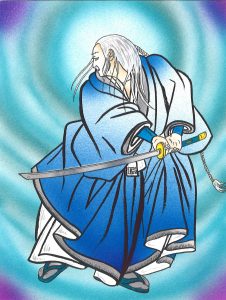 The cards you are probably most known for are the initial senseis introduced to the game. Did you plan to do all of the art for those yourself?

Not initially, no. The writers wanted the sensei cards to have a sense of cohesion and similarity, so the assignment had to go to one artist.  At the time, I was the only one who had the time to do all at one time in any set.  Our other artists could only take a few cards at a time to finish by the due date.

Who were the other artists you had considered to work on them?

Many artists come to mind who would have produced incredible work for the sensei cards.  I would have loved to approach many of the bigger names in the industry, but our budget was modest. The ones I would have liked to assign them to from our own artist call list at the time would include, but not be limited to: Brian Snoddy, Anson Maddocks, Ramon Perez, April Lee, and Robin Wood.

You mentioned that the writers requested the sense of cohesion and similarity with the senseis. Did other requests of theirs affect your production or workflow?

Established characters had to look the same, preferably with the same artist whenever possible.  Everything was driven by the storylines; something AEG prided itself on.  Many requests for how things should look would come from the writers and conceptual artists like Cris Dornaus.  They would write the descriptions of the cards, sometimes adding pictures for reference.  I would pass that info onto the artists and any further game-specific references that were needed.  I would also gather pictures of clothes, landscapes, weapons, etc. and send them to artists as a general image guide. 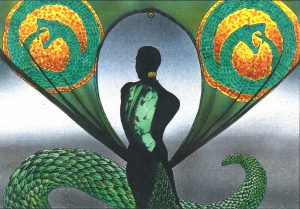 Was time and cohesion the same reasons doing the clan/faction banners fell to you as well?

Yes, but mostly that was me – I really wanted the Ancestral Standards. Cris Dornaus did a great job on the original mon for each clan, and I had an image in my head for the Standards that I really wanted to explore.  The team was really satisfied with the results, so we were all happy.

Were there any particular reasons for the choices you made in each of the banners design? Naga standard

I wanted each standard to be different enough to stand out from the others.  Some were very different – I was very happy with the Junzo Army Standard and the Naga Standard.  I liked the “prayer chain”(Shide) Standard for Shinsei’s army, too, since it reflected the traditional feel of Shinto.

You can see a Shide(left) next to the Shinsei Standard. The standard actually resembles a Gohei(right) as it is appears to be a pair of prayer chains attached to a stick.

What pieces did you find the easiest and hardest to do from all your work for the game?

The easiest was the Kirin.  It’s a signature piece and had been my personal totem for years before I came to L5R. Getting it for assignment was Matt’s idea, and one I’m grateful for.

Personalities were definitely the hardest for me, so I only did them if they were dropped by an artist close to the deadline. 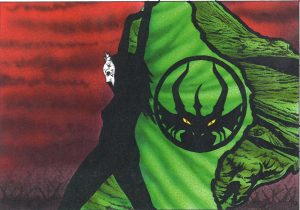 What are the biggest things you carried from your time with the game into your later work?

So many things, it’s hard to narrow it down…

For my job and volunteer work:  Learning how to work with different creative types/personalities to achieve a common goal is probably the most obvious.  Teamwork and communication can be difficult long distance, but it worked well for us.  I was also happy with the administrative and creative processes, and used both as needed, sometimes simultaneously.

In general:  A personal feeling of gratefulness and nostalgia for having been part of something wonderful.

For my artwork:  The biggest perk for me was being able to see, close up, the originals of so many artists!  I loved looking at their work, seeing their styles, processes, even the brushstrokes taught me so much to carry over to my own artwork.

If you could redo any one piece you did for the game what one would it be? Why would you change it and what changes would you do exactly?

The series of elemental rings would be my choice for a second take.  At the time, I liked the way the Fire Ring and the Water Ring came out, but the others could have used different sources.

Given the chance to do it again, I would go the traditional woodblock style for all, keeping only the ring symbols the same.

KC provided this series of images as examples to the style of background she would use in a new series of rings as well as mentioning she may do them again in her free time. 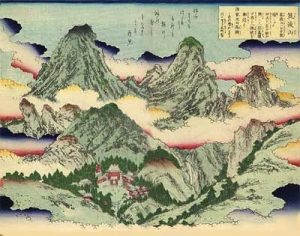 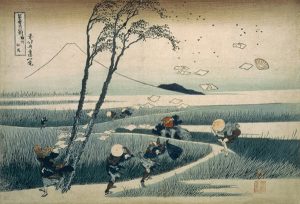 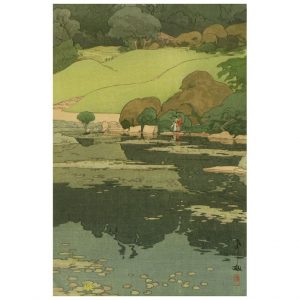 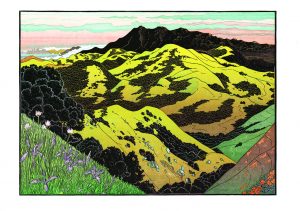