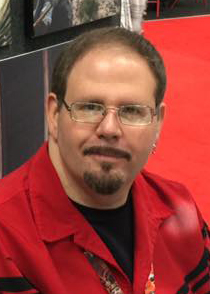 Brent has been producing professional art since the age of 14. He dreamed of doing fantasy/science fiction/horror art since the age of 5. Brent attended Southern Illinois University at Edwardsville where he received a Bachelor’s Degree in Art & Design. Brent then went on to further his education at St. Louis Community College at Meramec to learn at the School for Advanced Imaging, studying Graphic Design. Brent has been working in the fantasy/sci-fi games industry since 2011 and has worked with a plethora of companies and projects including (but not limited to) Wizards of the Coast on their famous Dungeons & Dragons games, Alderac Entertainment on several collectible card games (Legend of the Five Rings, Warlord, Romance of the Nine Empires and Doomtown). Also, Mongoose Publishing, Dave Arneson’s Blackmoor and currently 5th Epoch Publishing on the Metal, Magic & Lore, Vampire’s Codex and Ultimate Operative game lines. Brent has also been recently published in two high-end coffee table art book collections by Michael Publishing featuring art from some of the top artists in today’s fantasy art scene.

Brent produces all his work digitally. For inquiries about prints please contact him directly.