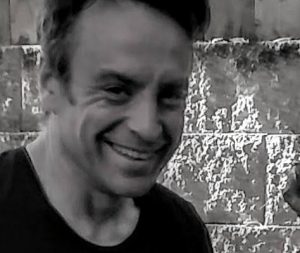 Born in Anchorage, Alaska on July 28th, 1968. Anson grew up on Barinoff Island in the town of Sitka where he discovered his passion for drawing and painting at a very young age. It was in the 2nd grade that Anson met his life-long friend, Mark Tedin, with whom he still maintains a close friendship. While growing up, Mark Tedin, who would also become an illustrator, served as a source of inspiration and as friendly competition which likely served to bolster each other’s skills and continued growth as artists through out the years. During Anson’s junior high years, Art Instructor, Dan Newman, also played an influential role in encouraging and nurturing Anson’s emerging talent. Upon graduating from Sitka High School, in 1986, Anson left the island to pursue further art education at the University of Alaska, Fairbanks. With his major undeclared, and his tuition wholly self-funded he enrolled in whatever class he felt would broaden his reportoire of expression. His keen interest in anatomy and physiology had him even for a time seriously considering a path in surgical medicine. However, Anson’s dedication to his art won out in the end and after a year and half at University of Alaska, Anson moved to Seattle, WA to attend Cornish College of the Arts. At the time of enrollment, Cornish did not have an Illustration Department, still Anson was intent on studying there. Instead, he choose a hybrid of Graphic Design and Fine Arts courses, hoping to focus on illustration, which he felt lie somewhere between those two areas. As an art student, Anson found illustration work by ‘keeping as many lines in the water as possible,” which first led to illustrating for a magazine, Technical Analysis of Stocks & Commodities. He went on to do considerable work for the Seattle Weekly and cover art for Pagan Publishing and illustrating the book Dark Dreamer. Anson simultaneously worked for a Seattle vintage clothing store, Dreamland where he did custom painted leather jackets, whose clients included rock musicians, Queensreich. He designed logos and promotional material for fashion designer, Betsy Johnson and stage backdrop for Jim Rose’s Circus Sideshow. Other early clients included Seattle Supersonic’s. Meanwhile, his artwork was gaining exposure through numerous shows and installation pieces at galleries, nightclub venues and retail stores throughout the Seattle area. Amidst so many promising avenues, it was through his work within the gaming industry, however, that Anson would realize his greatest notoriety. At the suggestion of friend and fellow Cornish student, Andi Russou, Anson submitted an illustration to Jesper Myrfors, whom was also studying at Cornish and worked for a small start-up gaming company called Wizards of the Coast. Jesper apparently liked what he saw and got Anson his first assignment at Wizard’s of The Coast illustrating a book titled “Thystram’s Collectanea” for the role playing game Talislanta. By this time, life-long friend Mark Tedin had finished up his college degree and joined Anson in Seattle to illustrate for “Thystram’s Collectanea” as well. From there both Maddocks and Tedin would go on to do a significant amount of work for Magic The Gathering, beginning with their Alpha set, for which Anson illustrated 30 cards. Anson would go on to work for White Wolf (Wraith), Garfield Games (The Great Dalmuti & RoboRalley) Alderac Entertain Group (Legends of the Five Rings) and Mayfair Games, among others. He now lives in Seattle and works as a free-lance illustrator, taking commissions and occasionally attends MTG events. Games for which Anson has published artwork include: Battlecasters, Battlelords of The 23rd Century, Doomtown, Everway The Great, Dalmutti, Jyhad, Legends of the Burning Sands, Legend of the Five Rings, Magic the Gathering, Netrunner, Rage, RoboRalley, Shadowfist, Vampire: The Eternal Struggle, Wraith, and Xxxenophile