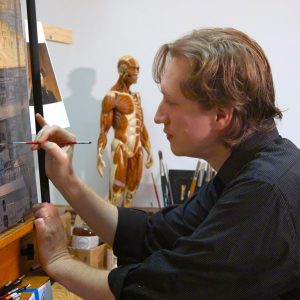 Drew Baker is an award-winning artist and illustrator. Born in the American West and raised in Western New York State, Drew studied art at Montserrat College of Art and Yale University, earning a BFA from Montserrat. Over the past twenty years he has done illustration work for some of the most demanding and best known brands in the world, including Star Wars, Dungeons & Dragons, and Magic: the Gathering.
During his career he has transitioned from digital painting to oils, and has been exploring the impact – and logistics – of large scale originals.
He lives with his wife and children in Western New York State.