Jason Engle began producing pieces for Legend of the Five rings with their set Dark Allies in 2002. He continued producing work for the game up through to when it changed hands to Fantasy Flight Games. For this interview I’ll be focusing on his early years working with L5R. 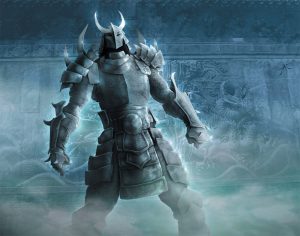 How did you initially become involved with Legend of the Five Rings?

I met the art director at the time, Jim Pinto at GenCon, (this was either in 1998 or 99) and I had done a few other larger projects that debuted at the show, so it was an easy kind of situation where we hung out at a few of the industry parties, and he knew enough of my work already, even though it was very, very early in my career, and he was happy to send me some cards shortly after I got back home from the show. Thankfully he liked the first images I created quite a lot, and continued to send me work long after.

Did you play before or after producing work for the game?

I have never played a game of L5R. It never had a very large community where I live, and while it was always a big presence at the conventions I attended, I was always too busy running a booth or artshow table to play many games. Don’t get me wrong, I love card games, and tabletop games in general, but just never had a chance to try it out, and I knew enough not to invest money in a game I would only play on the rare occasion of finding people to play it with. But I did learn a bit about the rules, and the living storyline quality of the game, and I did appreciate its elegant design and plot driven expansions, both of which were responsible for its devoted fan base and unusually long lifespan.

What was it like diving into a game with such a detailed setting and devoted fan base?

The game had a wonderful style guide to work from, which made learning about the setting and characters both entertaining and easy. It has a lot of lore these days, most of which I was able to learn as it was being developed (one of the perks of being a part of the game so long), and was lucky enough to contribute to the characters and designs for a lot of it. And I just loved the spin on standard fantasy themes, it was a great opportunity to learn more about Asian culture and visual ideas I’d never had a chance to include in my work before. 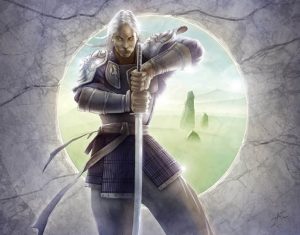 Which of your early pieces for L5R is the most memorable?

Doji Seishiro, and Bayushi Hirono were both used to make huge L5R banners for the AEG booth at GenCon the year after I started working on the game. That was the first time a company had really used my work in such an important advertising space, and blown it up to such epic size. It was really satisfying and unexpected, and I’ll always have a fondness for both images for that reason. In later years, I enjoyed working on Moto Yudai and Moshi Sasako quite a bit. It was also fun to do so many versions of Kuni Renyu, as I’d never had the chance to do the same character before, so doing him not once but several times, was an interesting challenge.

What’s it like looking back on those pieces now? 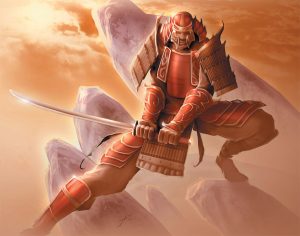 Doji Seishiro and Bayushi Hirono are both still very strong poses and fun images in a lot of ways. Of course I created them almost two decades ago, so the fundamentals of the art, the proportions, lighting and such, are done very differently than I work today. But they are still fun to look at despite that, which really shows the power of a good composition.

One of the earliest and most prominent characters you worked on was Doji Reju. What was your sense of this character as an artist? Which of qualities did you want to make sure you captured and conveyed in your depictions? 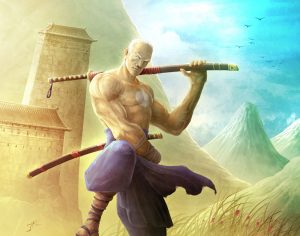 There were a number of pieces already for Doji Reju, so it was a matter of taking those images and showing the character in a different light. Some of the images were fairly peaceful looking, in one he was drinking tea for example, so I wanted to convey a sense of quiet confidence and relaxed power, rather than a big action scene that would have really gone against the established qualities for the character. But I still wanted him to look powerful and capable, so I showed him in a relaxed pose, but featuring his duel swords prominently, like he could spring into action at a moment’s notice, and then get back to relaxing an instant later. I also wanted to use the background to create a similar balance, showing flower petals and blowing grass, with a vivid blue sky on a bright and peaceful summer day, but with powerful castle towers in the background, which create a military undertone to the pleasant countryside.

Special thanks to my friends Amy and Dave who assisted with this as well as Jason Engle for taking time to answer my questions. Check out Jason’s artist page here for more details on his work.

One comment on “The Early Years, Interview With Jason Engle”